In the southern transept-arm, above the passage connecting the temple with the monastery, there are side organs from the Baroque era hidden behind an incredible, monumental front – one of the most beautiful fronts in northern Europe.

The woodcarving was made by an unknown artist (some sources mention Mateusz Scholler from Gniew) in 1677-1680 for the organs built in 1679 by Jan Jerzy Wolff, an organ builder from Gdańsk. The multi-storey work is decorated with an unusual richness of sculptures and reliefs: pipes, framed on each side with chambranles, melted into an impressive decoration composed of plant ornaments (acanthus leaves, garlands), angels and mascarons. Extremely expressive and dynamic sculptures complement the whole structure. The most impressive sculpture is the ascending Christ crowning the organ front – half naked, dancing with raised arms, almost hovering over clouds, as if he was getting off the ground and detaching himself from earthly reality. Such a form of the Ascension motif is connected with the Old Testament image of King David dancing and jumping in front of the Ark of the Covenant; it expresses joy resulting from his union with God the Father.

The organs are equipped with a mechanical tracker, 42 voices, 3 keyboards and a pedal. In the middle of the 19th century, a new neo-Gothic instrument was built in the Basilica on the newly built gallery above the main entrance. It has been used since then, as the Baroque instrument was not strong enough to fill the whole temple with sound.

The side organs were reconstructed in 2003 by Józef and Zdzisław Mollin from Odry. However, the front was still in poor condition – there was a lot of structural damage, and the wood was becoming more and more degraded, in some places it was decaying. Gold and silver plating, as well as polychromies were damaged, chipped and with numerous defects. The work that required immediate intervention is now undergoing a major restoration as part of the project “Cathedral Basilica in Pelplin – renovation and opening of a new exhibition area”.

The completed works were accepted through a protocol by the Provincial Office for the Protection of Monuments in November 2019. 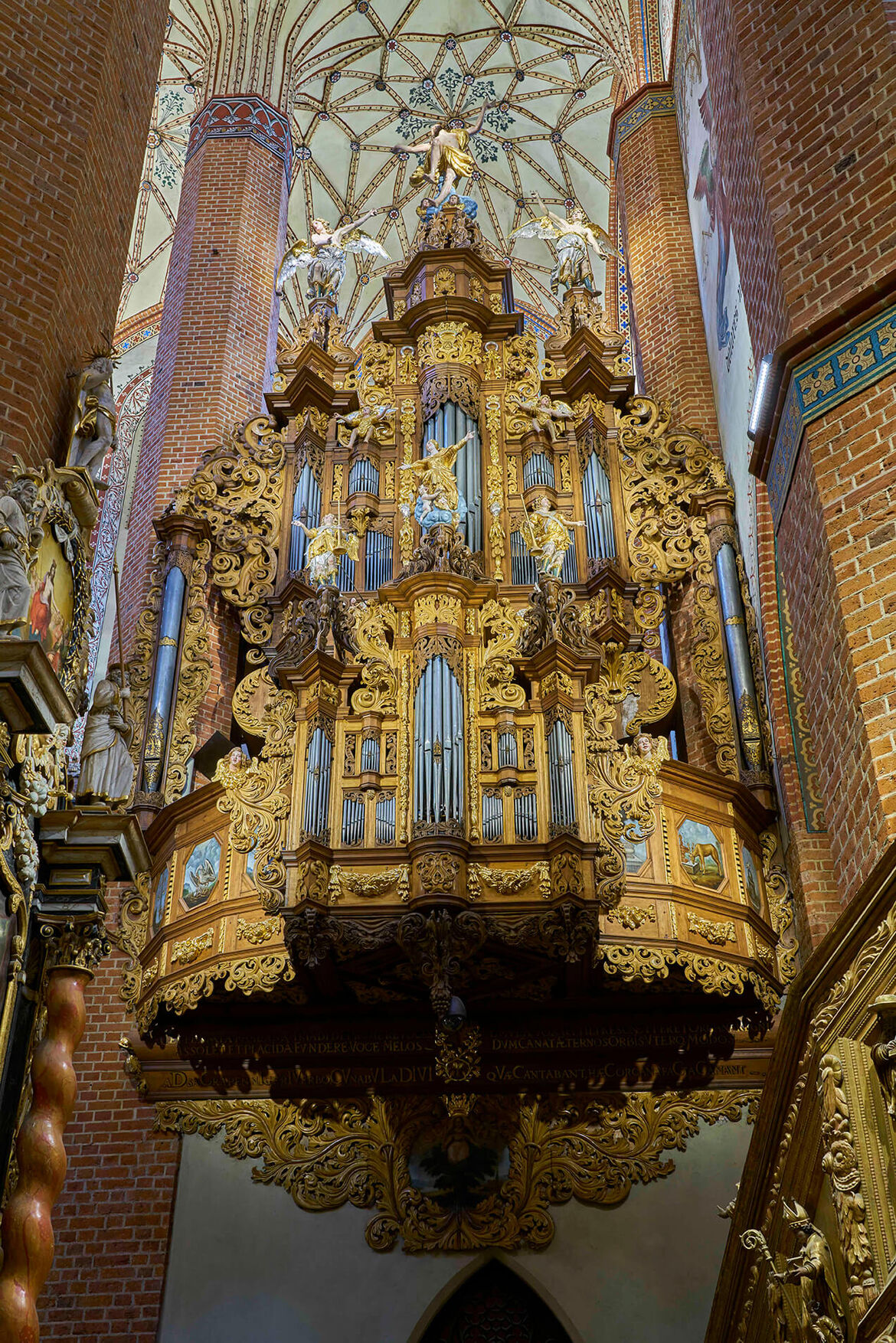 Two late-Baroque altars standing in parallel on both sides of the main nave under the invocation of St. Adalbert and St. John of Nepomuk are a pair of nearly identical altars made by famous Czech stucco decorators from Prague, educated in excellent Bavarian workshops. Both were founded in 1741 by the Abbot, Wojciech Stanisław Leski, and the local convent. They were consecrated in 1757. Both are distinguished by their sculptural decoration and their characteristic late Baroque form, with columns reaching out to the viewer. The canon of contemporary art also aimed at presenting the main stage under a spectacular curtain-baldachin, which was modelled on the works of Bernini. They are made mainly of stucco,
a mixture of precious plaster and marble dust which facilitate shaping of the final form and perfectly imitate marble after being painted. This was one of the favourite techniques of that time.

The restoration work carried out on both altars is part of the project “Cathedral Basilica in Pelplin – renovation and opening of a new exhibition area” and will last until the third quarter of 2020.

Altar of St. John of Nepomuk

St. John of Nepomuk lived in the 14th century and was a Prague canon. He was imprisoned during the conflict between the Czech king and the archbishop and was killed after being tortured – according to legend, it was because he refused to reveal the secrets entrusted to him during confessions with the queen, who was suspected of being unfaithful to her husband. The iconography of his representation focuses on these two aspects – martyrdom that equates saints with kings and the seal of confession for which he became a patron: his head is surrounded by an aureole with five stars symbolizing virtues of martyrdom, he himself is dressed in a canonical costume and an ermine coat, due to the kings, and holds
a palm branch (another symbol of martyrdom) in his left hand. He is accompanied by two angels (putti): the left one holds a sceptre, an attribute of royalty, and the right one, with
a breviary and a biretta, has a finger on his lips, symbolizing the seal of confession. The side sculptures depict patron saints of the altar: John the Baptist with a shepherd's staff and John the Evangelist holding a chalice with a venomous snake.

St. Adalbert lived in the 10th century and was a Czech Benedictine and Bishop of Prague. His main merit was his missionary activity – among the Slovaks, Hungarians, Pomeranians, and finally Prussians who killed him for his faith. It is precisely these facts – bishopric, missionary and martyrdom – that are associated with the iconography of the altar that was dedicated to him. The saint holds a cross of the metropolitan and archbishop. One of the angels (putti) kneeling at his feet holds a symbol of Adalbert's journey to Prussia – an oar, which according to legend was used to stun him. Side sculptures in turn depict other saints-martyrs: St. Stanislaus, just like Adalbert, one of the patron saints of Poland and St. Thomas Becket, the Archbishop of Canterbury. The first one looks down on the head of Peter. He was resurrected through prayers of the saint to testify to the legality of the transaction before King Boleslaus the Bold. The second one is depicted with a sword in his head, which refers to his death in the cathedral – the knights of King Henry II, whose manipulations were stigmatized, struck a blow to his temple.

Four Rococo confessionals, standing in the side naves, were created after 1750 and were the last Cistercian foundation in the Basilica. The other four confessionals, built on the model of the other confessionals, were created in the 19th century, repeating their iconographic programme and ornaments. All of them are black and richly decorated with gold, shell and floral motifs and angel heads. What distinguishes them from each other is their shape – the form of Neo-Rococo copies is simpler and stiffer than their more casual and soft prototypes.

When it comes to iconography, the 19th century confessionals precisely copy the motifs of their Rococo originals – they are all crowned with emblems with reliefs, polychromed images coated with gold depicting a great sinner who converted and became a saint. These are, consecutively: Saint Peter with the keys to Paradise and a rooster on the column (the symbols of his holiness and sin – denial of Christ), kneeling King David (who seduced Bathsheba and killed her husband) with a harp on his knees (the symbol of his psalms), Mary Magdalene (a converted harlot who, purified by penance, lives a new, holy life) and Good Thief Dyzma (his conversion is symbolized by the relieving ropes which were used to tie him to the cross). The same allegories of repentance are placed on the door of the confessionals: the heart on the anvil, shaped by the hammer of a divine blacksmith, a millstone crushing the hardness of hearts, a boy (symbolising Jesus) sweeping sins in the form of snakes from the heart, and finally the boy casting sins out of the heart with the light of a lighthouse.

Six out of eight dangerously unstable confessionals are covered by the project “Cathedral Basilica in Pelplin – renovation and opening of a new exhibition area”. They are subject to successive conservation works that are expected to be completed in the third quarter of 2020. 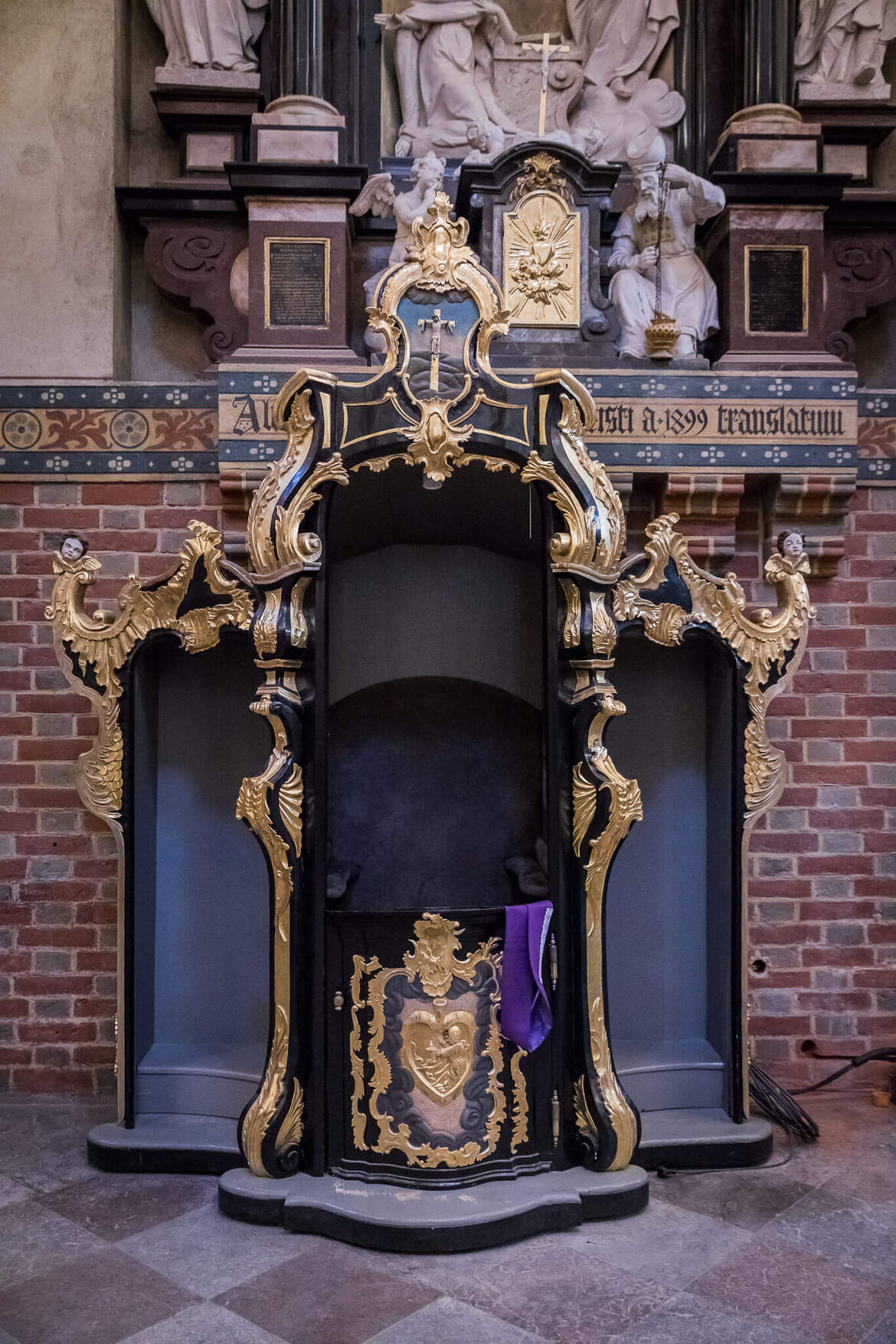 The windows located under the vault of the main nave and the chancel date back to the end of the 19th century. They were created as part of the regothicisation of the temple, when it was decided to restore the original appearance, in line with the strict spirit of Cistercian architecture, to both the interior and the façade. They were made in the studio of Friedrich Stummel of Kevelaer, who also designed a new polychrome for the interior of the Basilica, with toned-down colour scheme and mostly abstract forms, created by modest, ordered architectural, geometric and floral ornaments. The stained-glass windows, like the polychromies, remain in conformity with the simplified Cistercian style, presenting a traditional carpet pattern. Only the huge windows in the eastern and western façades had presented figural scenes, but unfortunately they were destroyed during the war in 1945 (the present ones were built in the 1960s and 1990s).

The stained-glass windows, which are on the verge of collapse, are subject to renovation as part of the project “Cathedral Basilica in Pelplin – renovation and opening of a new exhibition area”. They are scheduled to be completed in the first quarter of 2021.

Unique technical monuments, which were previously inaccessible to visitors, are presented in the attic.

Speaking of the monuments, we have to mention a giant tread-wheel from the 17th century, six cranes (including at least one from the turn of the 17th and 18th centuries) and turnstiles (treadmills), bender, or equipment for material processing. The Basilica was constructed with innovative devices used to, for example, pull building materials and wooden elements of the rafter framing. The unique collection is the oldest set of technical devices in Poland and one of the oldest in Europe.

The listed technical monuments have not been preserved so far. The most interesting device – tread-wheel – was on the verge of collapse (the wooden structure of the crane wheel was heavily tilted). Some of the devices were heavily corroded. The renovated monuments will be made accessible to visitors along with the entire attic of the Basilica.

The portal is co-financed by the European Union from the European Regional Development Fund under priority axis VIII Protection of cultural heritage and development of cultural resources of the Infrastructure and Environment Programme 2014-2020.